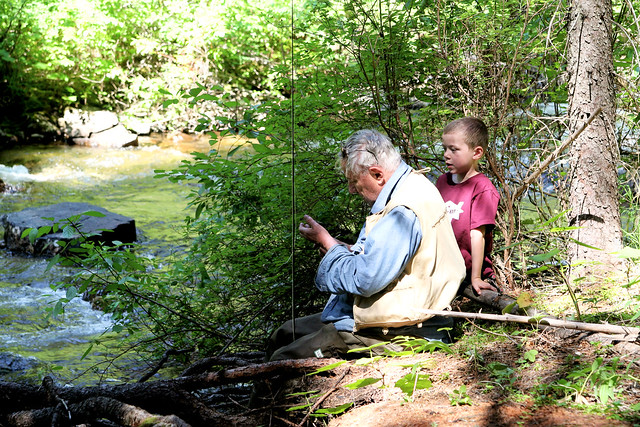 Dad crouched on a boulder planted in the middle of the Wind River. For what seemed like hours, he had studied the deep pools and brisk eddies around him. With a spider’s grace, he flung his line, allowing the lure crafted from pheasant feathers or polar bear fur to settle on the river’s surface.  Its shadow was larger than the mosquitoes’. A breath and a heartbeat.  A flicker beneath the surface. Dad pulled more line from the reel and allowed the lure to slip across a riffle and into a pocket of darker water. Suddenly, there was a tug on the line. With a flick of his wrist, he set the hook and reeled in his catch. His prey struggled, swimming this way and that. Dad’s fishing pole arched, but his hands remained steady and his gaze intent.

From where I watched on the bank, it seemed as if everything happened in slow motion. I fixated on his green rubber boots as he carefully stepped towards the boulder’s edge. Next, I focused on the net as he lifted it from the river, its dripping web frustrating the trout within as it writhed for freedom.

And then everything sped up. Dad pulled the fish from the net, grasped it firmly, and dashed its brains out on the rock beneath his feet. From the many-pocketed vest he wore, he pulled out a sharp knife and dragged the blade along its belly from tail to top. His blunt fingers reached inside the cavity and pulled out the liver, lungs and heart and released them back into the stream. “That’s gonna be good eatin’,” he said, grinning. 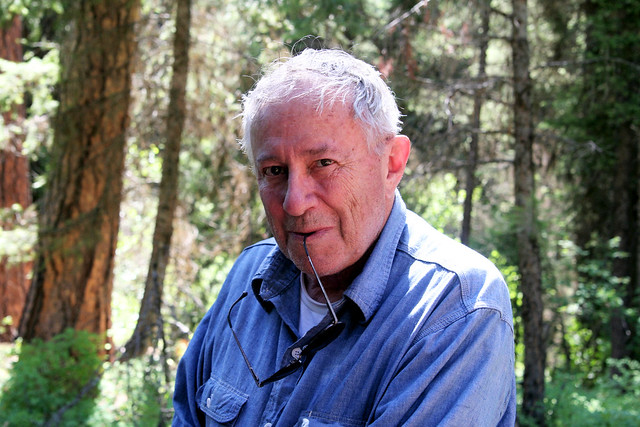 His composure fractured from time to time. One snowy winter’s day, I hitched a ride home with my boyfriend, Doug, in his Chevy Impala. When the car skidded into a telephone pole, my head connected with the windshield. Dad came to help, crying out, “Oh God, are you ok?” I reassured him as best I could, but he couldn’t look me in the face, bruised and bloody as it was. He took me to the hospital where a doctor prepared to treat the hematoma on my forehead by unwrapping  a massive syringe.  A nurse assisted him to a seat, where he sat with his head between his legs.

In memoriam, Harold Stanton, who passed away on this date in 2013.

Ichabod Crane is an unlikely hero for a historical romance. In Washington Irving’s famous tale, The Legend of Sleepy Hollow, he is described thus:

He was tall and exceedingly lank, with narrow shoulders, long arms and legs, hands that dangled a mile out of his sleeves, and feet that might have served for shovels. His head was small, and flat at top, with huge ears, large green glassy eyes, and a long snipe nose . . . To see him striding along on a windy day, with his clothes bagging and fluttering about him, one might have mistaken him for some scarecrow eloped from a cornfield.

Everyone deserves a chance at love, of course, no matter how they look; however, the gangly and shovel-handed generally don’t appear in bodice rippers. We usually see specimens of this sort:

We wouldn’t know if his clothes were ill-fitting, since the romance hero usually walks around shirtless.

Alyssa Palombo manages a feat of extraordinary magic by tranforming Ichabod Crane into a believable romantic figure. In The Spellbook of Katrina Van Tassel, her “feminist” retelling of The Legend of Sleepy Hollow, she describes him in this way:

He was young, that much was certain–likely only in his early twenties. He was tall and gangly, with long arms and legs; he nearly towered over me. Were my father to stand, his own considerable height would be no match for this man. His brown hair, which he had tied back at his nape with a simple black ribbon, was shot through with gold. Wide eyes stared back at me, a startling deep green, like the moss that grew at the banks of the stream in the woods. His ears, I noted, were unfortunately large, yet somehow made his already pleasant face even more endearing. He was handsome, but not too much so.

I was delighted by the idea of this nerd turned hunk. Unfortunately, I have grown into a hard-hearted creature in middle age and find myself impatient with effusive romantic scenes in books and movies. The first half or so of The Spellbook was little more than overwrought lust between two young people who, by society’s standards, were ill-suited for one another. I’m sure some people will enjoy this depiction of forbidden love, but it wore me out.

I still believe in love, but I’m much more moved by relationships that are grounded in reality, established and nurtured over time, developed through thick and thin…and expressed primarily in small, but consistent loving gestures. The great romances of stories seem too impetuous and inflamed for me. I have a hard time believing those sorts of relationships will last beyond the initial burst of lust.

The second half of the book redeemed itself primarily because Katrina matured. Her adult voice and perceptions were much more tolerable to me. Kudos to the author for developing her heroine so successfully! I particularly liked how Katrina’s relationship to her best friend and her housekeeper deepened as she weathered her trials. Her own sufferings prompted her to consider those of these two special people in her life and she stepped up, offered them her attention and care.

When I first began reading this book, I was worried that it was going to be a slog because the dialog was so awkward. The author attempts to recreate the language used in colonial America. I can’t judge how accurate her rendition is because I don’t know enough about how language was used then; however, I wasn’t impressed with it because it made the exchanges between the characters seem so stilted.

Mr. Crane laughed, a warm, rich sound. “I had hoped I was not too bold, nor overstepping. But it did seem that you had no particular desire for that gentleman’s company.”

I don’t know if this is entirely accurate, because I haven’t sat down to analyze the text closely, but I was left with the impression that the characters always spoke in complete sentences. Who does that? Finally, the language had the unfortunate effect of making the character’s emotional outpourings seem more melodramatic than necessary.

Fortunately, I didn’t give up on the book because of my issue with the linguistic style. At some point–probably one third to halfway through, I was completely drawn into the drama of it all. I had to know what happened. Just like the characters, I wanted to know whether or not the spectre would prove to be real. I wanted to know if Katrina would be able to tap into the magic of the world and I wanted to know if there was any possibility of a happy ending.

Overall, I thought the book was really well done. The author’s post-script added to my appreciation of what she had been trying to achieve with this work: infusing a previously two-dimensional female character with spirit, agency and a voice. She did her research, but knew when to allow her artistic license to dictate one deviation or another in order to keep the story compelling and the atmosphere rich. I liked the bits of Dutch culture and language that were sprinkled throughout the tale and the grounding of the story in a particular time by references to events outside the small world of Sleepy Hollow. I look forward to reading more books by Alyssa Palombo!

Netgalley provided me with a free copy of this book for an honest review. It is due for publication on October 2, 2018.

Top Ten Tuesday is a meme hosted by That Artsy Reader Girl, featuring a different top 10 theme each week.

Day 9 of the @stylemakerfabrics #sewconnected photo challenge: style. My style is largely dictated by my workplace dress code and isn’t represented in these photos. I wear a lot of sheath dresses and jackets. I tend towards more tailored, classic looks. I would love to be able to sew those sorts of garments and am working on developing my skills. My casual style is more in flux. I’ll try just about anything from bright to subdued, fitted to loose, always much improved with a feline accessory. #sewingafter40 #seattlesews #memade #memadewardrobe #diyfashion
@stylemakerfabrics #sewconnected photo challenge day 8: tips & tricks. Having trouble sewing over thick intersecting seams on your jeans? Hammer them into submission (use some restraint because you can damage the fabric). #sewingover40 #seattlesews #sewingismytherapy
Oatmeal wheat bread. I envision this being part of some great sandwiches. #bakingfromscratch #baking #breadmaking
I missed Day 7 of the @stylemakerfabrics #sewconnected photo challenge, but here’s Day 8: palette. If I could dress myself in Van Gogh paintings. I’d be perfectly happy. I particularly love shades of gold juxtaposed with shades of blue as in his sunflower and iris paintings and Starry Night. #seattlesews #sewover40 #sewingismytherapy #memade
My daughter and I got some air today. Flowers are still blooming and birds are still singing.
My loaves of honey walnut bread look and smell tasty. Can’t wait to break into these! #baking #bakingfromscratch #bakinglove