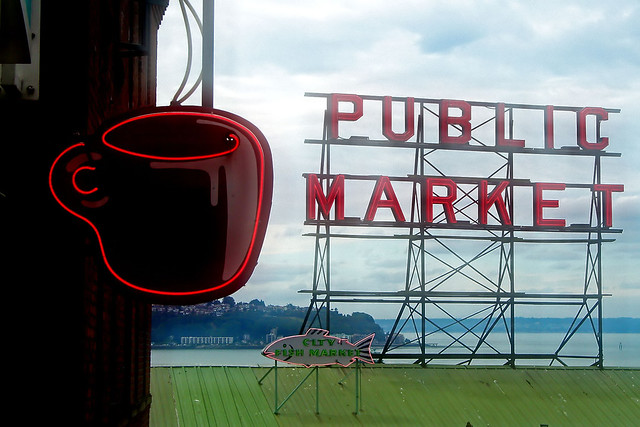 This steadily glowing neon sign draws people from far and wide into Pike Place Market, known as “the heart of Seattle.” It’s an apt metaphor, for the place positively throbs with activity. Folks from all walks of life course through its arcades: farmers, florists, fishmongers, artisans, street performers, chefs, city dwellers shopping for their evening meal and tourists, tourists, tourists.

The hustle and bustle has characterized the market since opening day in August 1907, which turned out to be a clamorous fiasco. Eight farmers parked their produce carts on the new plank roadway fronting the Leland Hotel and were overwhelmed by tens of thousands of eager shoppers. Their enthusiasm for the farmers’ enterprise was fueled by anger at the outrageous prices middlemen charged for produce at other locations. At Pike Place, the public dealt with the producer himself, who sold his own goods at a reasonable mark-up. To this day, it’s still a place to “meet the producer.” 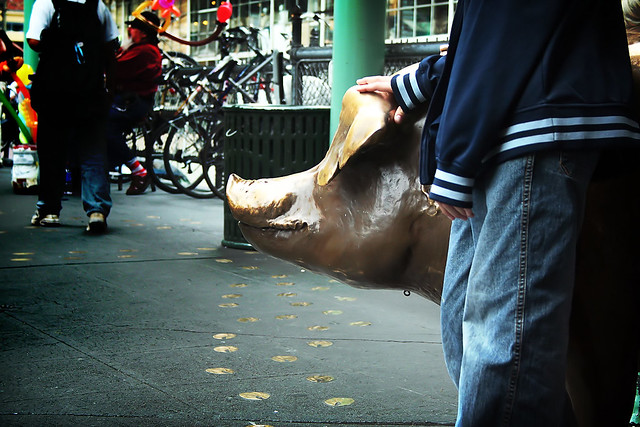 Time and time again, developers have sought to raze the market’s eclectic warren of shops and stalls so they could erect towering tributes to modernity and “progress” in its place. Time and time again, passionate groups have thwarted those efforts, successfully preserving a living bit of history. The people cherish this place of character and spirit, this bastion against an ever-encroaching sea of sterile, soulless commercial spaces.

Rachel, the Market’s bronze piggybank, stands at the entrance to the main arcade, greeting visitors from all over the world. They feed her with pennies, pesos, lira and yen, which the Market Foundation collects for its preservation work. 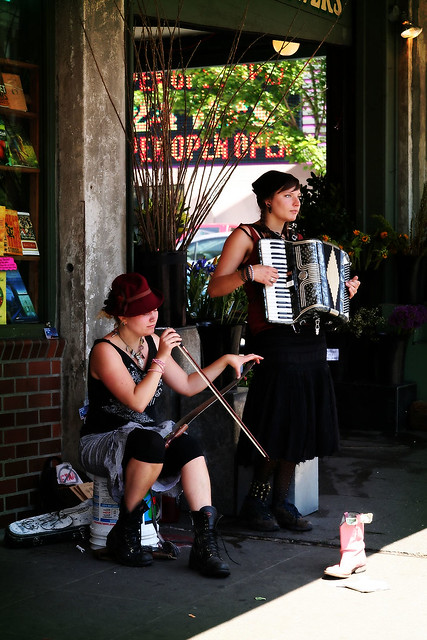 Rachel also keeps an eye on the many street performers who liven up the place with everything from soul-stirring ballads, to fantastic magic shows and daring juggling acts. Twelve different shows may be taking place around the market at any one time. If you keep your eyes on the pavement, you may spot one of the bronze musical notes that marks where performers can do their thing and set out their hat (or cowboy boot) to accept gratuities from passers-by.

The market attracts some of the more quirky and unique performers. Unless you live in Minnesota and regularly dance the polka, where else can you run into a woman squeezing away at an accordion and stomping her foot to ring the bells around her ankle? Where else would she be accompanied by someone playing a saw? 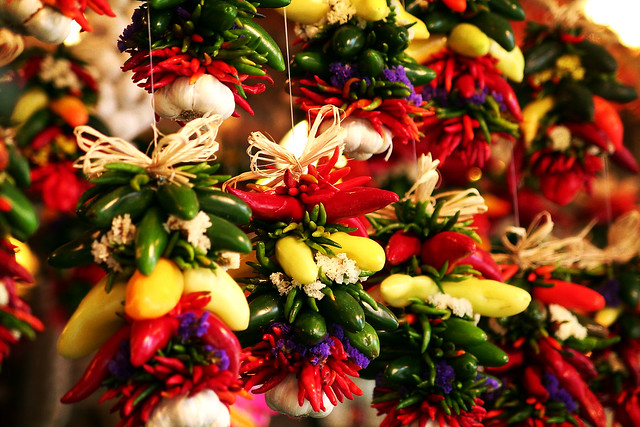 Before you dismiss the market as just another tourist trap, you need to understand that it’s a market first and foremost. People still shop there regularly for their meals and chefs scour the place for the freshest produce and fish available in the area. Many locals also turn out to take advantage of some of the remarkable bargains that are to be had. Often, in the evenings, you can see people with sparkles in their eyes cradling one of the huge bouquets they just bought for a ten spot. 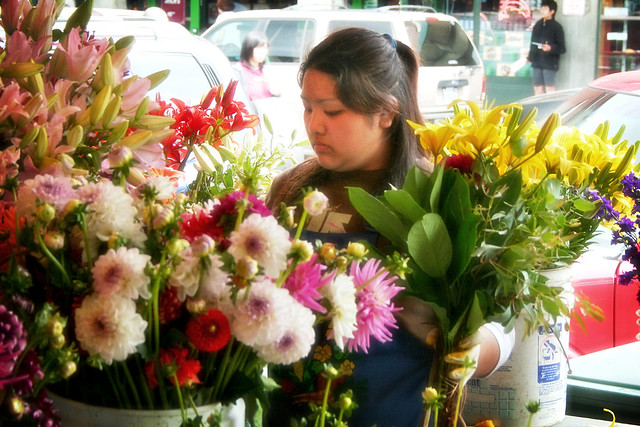 It is a real, honest-to-goodness market. It’s also a market with flair. Other grocers may attempt to emulate the market’s memorable produce displays, but they’ll never quite match it. Something about the environment lends a gem-like gleam to the brilliantly colored fruit and vegetables arranged so artistically at each stand. 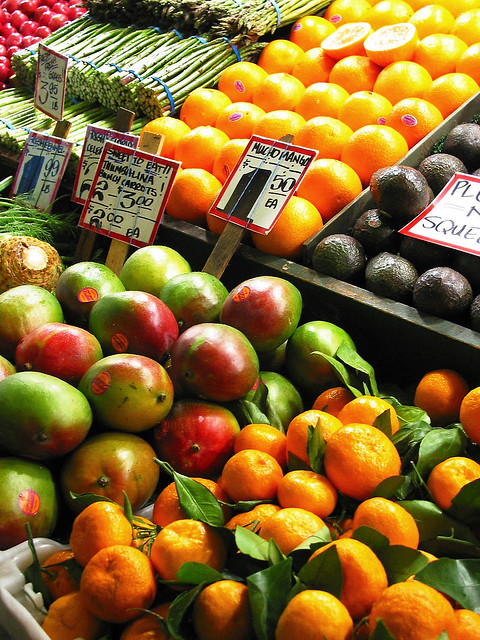 And in true market style, the most magnificent displays are also those bearing some of the quirkiest signs. If beauty doesn’t sell the goods, then humor surely will. 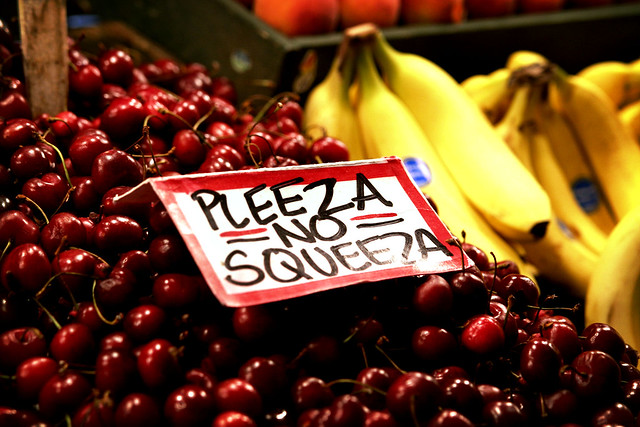 If anyone’s discovered how successful engaging the public is when marketing your goods, the guys at Pike Place Fish sure have. When John Yokoyama first bought the stand back in 1965, he didn’t have any marketing budget to speak of. Much in the way that Muhammad Ali proclaimed himself to be the greatest, John and his crew decided they would be world famous. And they are.

“I am the greatest, I said that even before I knew I was.”
~Muhammad Ali

These fellows made their reputation by tossing fish with the ease of jugglers and enthusiastically calling out their wares to passers-by. If you think that’s no big deal, I double dog dare you to try catching one of those slippery, slimy fish with any bit of grace. They are amazing! 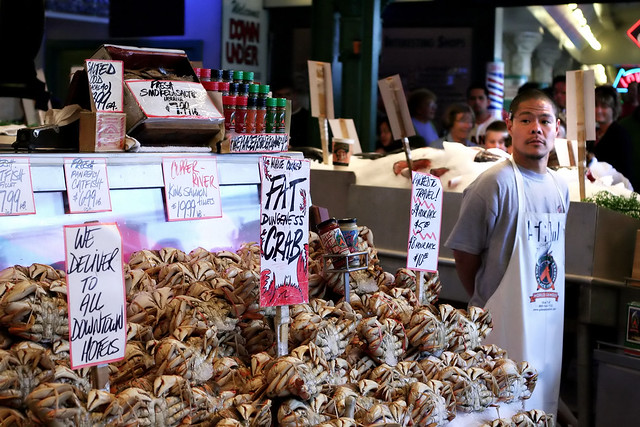 The throngs of people who have visited the market have left their imprint on it in various ways. The pavement in the arcades is worn down by the feet that have trod  those corridors throughout the past century. In this young country which prides itself on the shiniest and the newest spectacles, it’s unusual for anyplace to be allowed to show signs of age and use. The market provides us with a physical connection to a long and interesting past. 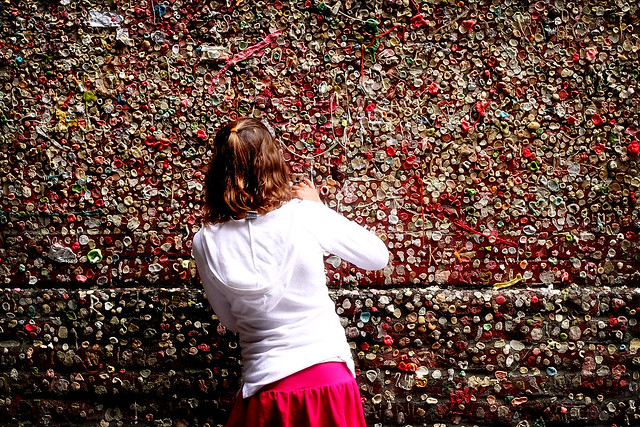 One of the more unusual signs of visitors come and gone can be found at the great Wall of Gum, which started out humbly enough. In the early 1990’s, patrons of the Market Theater left bits of gum on the wall while waiting in line to buy tickets. Through time, the spectacle has grown into something sublime. Painstakingly spelled out in the sticky substance are names of sweethearts and exhortations for peace and harmony. It’s as colorful and eclectic as the market’s patrons themselves.

My friend, Donna, named these my Marie Antoinette earrings. I’m really thrilled with how they turned out.
I’m trying to not think about all the violence in my city tonight, so I worked on something pretty. This earring represents a significant learning curve for me with #beading Now I need to start in number 2.
My kids and I took a fun watercolor class at #wyldwoodcreative today.
lol! My daughter took a panoramic photo of me that makes me look a particularly tall extra terrestrial.
I’m almost ready to knit the ribbing. #knittersofinstagram
Art supurrvisor. #catsofinstagram