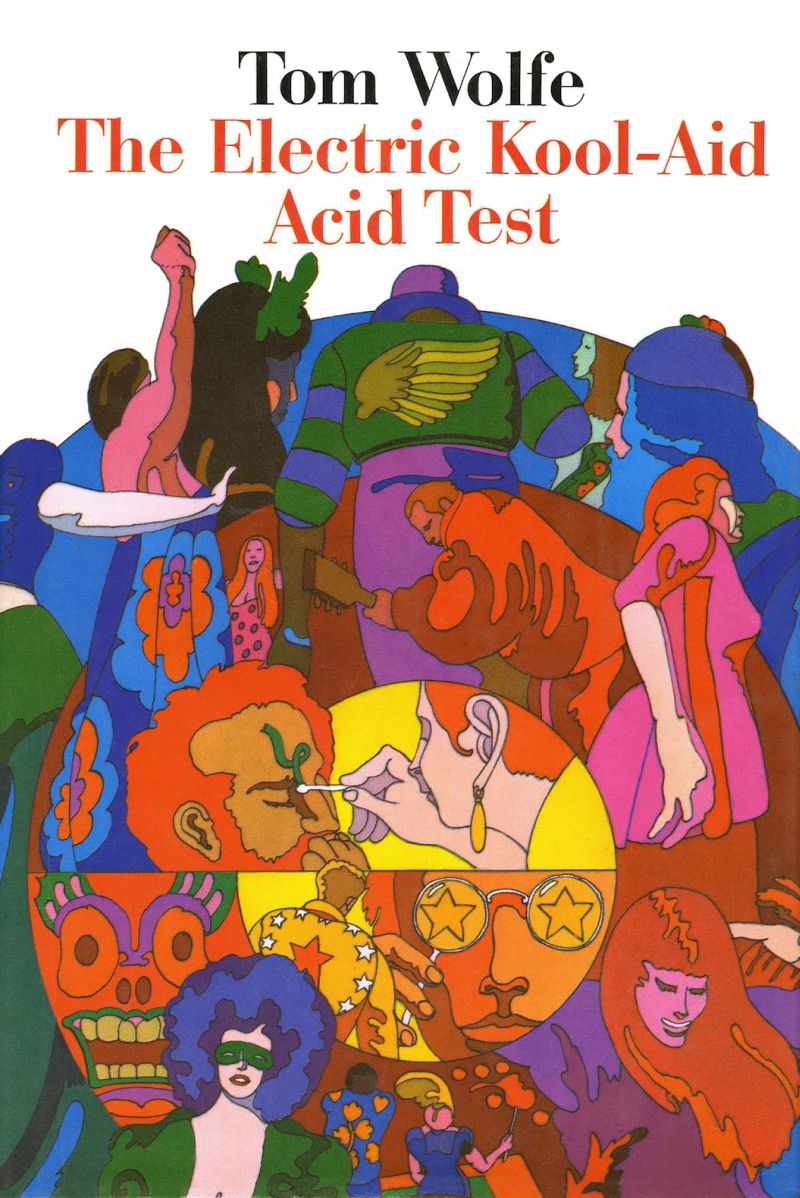 When news of Tom Wolfe’s death circulated in May, I took time to appreciate his legacy by reading The Electric Kool-Aid Acid Test. The book was originally published in 1968. It was a ground-breaking fusion of journalism and literary techniques that documented the exploits of Ken Kesey and his Merry Pranksters as they roamed around the US in a luridly painted school bus during the 1960’s. They sought to “turn on” the masses to group consciousness while experimenting with LSD and multimedia displays.

Right off the first page, the confusion begins. The language is poetic, elliptical, littered with participles and metaphors, esoteric concepts and brain fry. I struggled with this at first, trying to parse out each sentence and check for understanding. This approach didn’t get me very far. I gave in to the rising tide of the words and let them wash over me, just as I would do when listening to music.

“It’s like a boulder rolling down a hill – you can watch it and talk about it and scream and say Shit! but you can’t stop it. It’s just a question of where it’s going to go.” – Tom Wolfe, The Electric Kool-Aid Acid Test

I experienced the book in a more physical way than I would have ordinarily done. It wasn’t a mere intellectual exercise. It was a full mind-body experience. The passing of time, the rhythm of the words, the sensual curl of a phrase, like a tentacle of marijuana smoke–all worked their way into my perception. And, like some of the people in the book, I experienced some moments of exceptional clarity.

So, I said to myself, that’s what it was all about! I get it now.

I was referring both to the significance of the historical events recounted in the book and to my own experiences of bohemian living, spiritual exploration and coming of age.

I’m still trying to understand how Tom Wolfe could have created such a vivid picture of this psychedelic movement without ever taking LSD–and as one of the key practitioners of “new journalism,” where the journalist immerses himself in the scene he’s reporting on, it’s rather surprising. Perhaps it’s not as impossible to understand the state of consciousness brought on by such a drug when you spend enough time surrounded by people who used it frequently and were themselves masters of explanation and expression. Ken Kesey, the award winning author of One Flew Over the Cuckoo’s Nest, was one of Tom Wolfe’s primary sources, after all.

The second aspect of the book that’s confounding is the huge cast of characters. Under ordinary circumstances, it’s difficult to keep track of many people. What makes it even more challenging in this book is that they are referenced by both their conventional names and by the names they assumed when they joined the ranks of the Merry Pranksters, or in the parlance of the book, “got on the bus.” Among the ranks were Swashbucker, Speed Limit, Stark Naked, Hassler, Intrepid Traveler, Sometimes Missing, Dis-Mount, Gretchin Fetchin, Mal Function, Zonker, Mountain Girl, and Doris Delay. Most likely, had I read this when it was first published, a number of these people wouldn’t have needed an introduction. Neal Cassady, for instance, was a prominent member of the Beat Generation and was featured in Kerouc’s On the Road. Mentions were also made of Hell’s Angels, Allen Ginsberg, Timothy Leary, the Beatles, and the Grateful Dead. Wolfe often springs these people on the reader with little explanation until ten or twenty pages later. It’s worth the effort to figure out who’s who, because they are all interesting people in their own right.

There’s a lot of info about the Merry Pranksters on the web, some of which meshes with what’s in Wolfe’s book and some of which does not. In particular, the story of Cathy Casamo (a.k.a. Stark Naked) is wrapped up in controversy. Her portrayal in the book is that of a bus drop-out who had a very bad trip and ended up in the loony bin. Her friends contend that that’s an unfair description and remain upset with the Pranksters who abandoned her in Texas. They want to clear up the notion about her allegedly impaired mental health. They claim her seeming insanity was just the result of being really, really high and that she ultimately recovered.

New journalism may require the immersion of self into a story, but this method does not guarantee that one’s understanding of events will be entirely accurate–and of course, there’s the matter of bias.

For instance, consider the gang rape scene at the historic party at La Honda in August 1965. Wolfe describes the party in a effervescent fashion, a successful meeting of two disparate groups.

“Everybody, Angels and Pranksters, had a righteous time and no heads were broken.”

He concedes that there was indeed a gang bang, but that the girl in question was a volunteer, so it was ok. Wolfe wasn’t actually at the party, so his impression was derived second hand.

She “agreed to make the beast with two backs […] and happily so, with the chosen trio. But word quickly spread of the ‘new mama’ and soon she was surrounded by a large group of onlookers…drinking, laughing and taking a quick turn whenever some vacancy occurred.”  – Hunter S. Thompson, Hell’s Angels: A Strange and Terrible Saga

He notes that she “seems drunk, incoherent, not knowing, drowning…” Thompson continues, “It was not a particularly sexual scene. The impression I had at the time was one of vengeance. The atmosphere in the room was harsh and brittle, almost hysterical.”

Reading Thompson’s account cast a pall over the lighthearted impression I had gleaned from Wolfe’s, where the Hell’s Angels appeared like fierce-looking, but cuddly giants, whose humor was rough, but their belly laughs contagious.

What I liked best about the book was also what frustrated me the most about it. The narrative style is both brilliant in its conception and in its execution. It’s also challenging to read. It inspired me to wonder about reality, about perception, about who, what and when. I wouldn’t go so far as to say it made me wish I had been “on the bus.” All things considered, the heat, the smell, the terrible suspension and the unrelenting cacophony created by the variable lag sound system would have made me one cranky person. The pranksters’ stint in Mexico sounded even more hellacious. However, being able to opt out of conventional society, to boldly seek out Edge City and to live with the courage of one’s convictions–that has a timeless appeal.